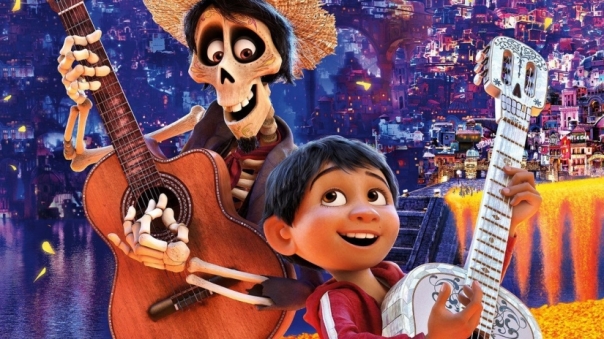 It bears mentioned immediately up front that this isn’t a Halloween film, though it will pop up with almost any Halloween movie list this year. Probably because of the timing of Dia de Muertos and the skull imagery. I knew this beforehand, but decided to watch it within my October film fest for a few reasons. I had wanted to see, but hadn’t gotten to it before now. And I knew it would be a happier film, and I deliberately sprinkled a few less violent or jump scare filled films within my planned schedule.

And goodness, I haven’t shed this many tears while watching a film in a long time. Happy tears, for the most part, but still a lot of them. It felt good to cry with just the sweetness of it all. Pixar has a history of hitting heart strings just right, particularly within me as I get older, and they nailed it with this movie. And quite honestly, I feel on the edge of tears frequently lately so it was cathartic as well to be able to let them out in happiness and sweetness. The film is also gorgeous, so much color and life in every shot!

And I loved the story. Both complicated and simple, the pull of what you want to do with your life vs your family. Some of my tears were certainly bittersweet, as while the film resolves happily I couldn’t help but all those that had to make this choice and never got the resolution Miguel receives. Don’t get me wrong, I didn’t want the film to end any other way. It’s just hard to forget friends’ stories of less-than-happy endings while watching.

Tonight’s beer accompaniment: Odell Brewing Green Coyote Tomatillo Sour. A very nice sour, not so sour that it pulled an especially strong face from me but still decidedly a sour (not a tart or sweet overkill, which I’ve had a couple beers try to pull and call themselves sour before, for shame) (not that tart or sweet is bad, but if you call yourself a sour you should be SOUR damnit!), with a nice trailing and mellow sourness to follow that initial blast.